The dancers, the writers, the hipsters, and the fighters. Jim Reese knows them all, trespassing into their lives with his good eyes and ears, giving each a gritty moment of worth. If you want poems smooth-tongued or surrealistic, don’t look here. But if you want folk as tough as cedars, rooted in work, sticking their noses into the wind, “eye-squinting tight,” well, slip on tough boots and come in. And you, too, will eventually love Willow. – Don Welch

Refreshingly accessible, Jim Reese’s new selection of poetry, These Trespasses, manages to layer myth and meaning upon a clean, crisp Midwestern vernacular, inventive imagery and luscious sounds. Reading These Trespasses over and over provides for a smooth and subtle yet deeper understanding of seemingly straightforward and enjoyable narratives. These Trespasses is a must re-read. – Raymond Hammond, Editor-in-Chief, New York Quarterly

These Trespasses is firmly rooted in “blasted country. Tough country.” Jim Reese’s world is hardscrabble. “Some call it salt licked.” It will work its way into your mind’s bloodstream. – David Lee

He knows that this life is what we’ve got. That it is not something to be bragged up, nor to be made fun of. Yet it should be sung. And Reese sings it in plainchant, without filigree and ornamentation.

Reese’s collection of poems, These Trespasses,was recently published by Backwaters Press, Omaha. Some of the poems in the book appeared as “Saturday’s Poems” at The Middlewesterner, so you know I liked Reese’s work before I ever saw this book. … One can ascertain that Reese has lived among real people, has walked in their shoes, sat with them on their stoops and in their taverns, and listened to them. Listened well. Heard their stories and their speech patterns.

These are “plain poems” in the best sense: sturdy and beautiful both, like Amish furniture. We only pass this way but once, and the journey is what you make of it, and Reese has chosen to make these powerful and moving poems out of the stories of our lives. He might be studying for a PhD yet his poems are “unstudied;” they are not the work of a naif, nor of a sophisticate pretending to be naive. Reese has the tools and he knows the tricks, knows the tricks well enough he doesn’t have to use them. He can let things be themselves; that is the beauty of simplicity. He is not clueless, but neither does he come off as hipper than those he writes of, nor hipper than his readers. As I say — authentic. Middlewestern. These poems are grounded in the stuff of this world, yet are never very far way from the music of our dreams. … That’s what these poems do — they hold on. The characters we meet, they hold on. The language of these poems holds on.

Jim Reese knows that this old mudball is all we’ve got, and he holds on; and his poems invite us to hold on, too. – The Middlewesterner

Poets Paint Powerful Images … Reese’s These Trespasses collects nearly 50 poems. Some of Reese’s poems jump out right from the title, like “Smell My Socks, You Bastard,” which recalls noted poet Charles Bukowski. His poem “Reading Her Lips,” about his daughter, is straightforwardly affecting — a crooked grin love poem that stays with the reader. – John Keenan, Omaha World Herald

The small-town, high plains place of these poems is described in spare but loving detail. Reese makes you want to be in on the joke and understand the hardness of this place, becoming friends and intimates with the sun-baked men and loose women he describes. One becomes nostalgic for the hard work of roofing or farming, and the late nights drinking bloody beer with cowboys, even if one has never actually done any of these things. … Men do live free in Jim Reese’s poetry, constrained only by gravity, heat, hunger and women. One character, a traveling salesman, is brought low only by the vast “space and place” of the Plains. This freedom from constraint is a major theme, and Reese experiments with both sober and quite playful poems. … Jim Reese’s poems have never been so ambiguous, but as he shifts his focus from the hard realities of a life lived outside to the more civilized moments of a baby’s bedroom, his truths may become more complex. – Lincoln Journal Star

A literary renaissance across the Great Plains, bolstered by distinctive regional presses, ambitious creative writing programs, well-attended city and state-wide literary festivals, and receptive fans, makes this part of the American West particularly vital right now for American letters. Additionally, Ted Kooser’s two-year appointment as Poet Laureate has helped garner national attention to the Plains and its poetic traditions. Among the new voices poised to make a significant contribution to this region’s literary culture is poet Jim Reese. In his new collection, These Trespasses, Reese trains his attentive, discerning eyes and ears to those telling details of life lived in place. From the porches, dank apartments, diverse bars, and vehicles of his personae, Reese inspects surprising, clarifying moments of poignancy and honesty, trespasses into connection and forgiveness. … Hardpan and salt-licked country can still be fertile ground for a talented poet. Like Mustang Dick’s songs, Reese’s poems “just taste like more” (48). One can forgive these trespasses that bring such luminescent news of life and love. – Susan Naramore Maher, Western American Literature, 42.1 (2007)

“Live and learn,” the saying goes. But any recent horror film offers a plethora of examples indicating that such is not always the case. The not-so-merry-go-round of the past seems to hold a magnetic fascination for some; they keep jumping on for another ride. Perhaps a more accurate saying might read, “Reflect honestly on life and you might learn from it.” Such reflection is evident throughout Jim Reese’s recent collection of poems, These Trespasses (Backwaters Press, 2005). There is a learning process recorded here, and honest reflection is at the heart of it. … And from this present perspective, a life now shared with a wife and new daughter, he casts a hopeful, if timorous, glance toward the future. A future wholly dependent on what he has learned through honest reflection on the events of his life thus far, including, and especially, These Trespasses. – Neil Harrison, Prairie Schooner

A jarring collection of real-life poetry that kicks like an old pump-12 gauge. … As noted Nebraska poet Don Welch says in praise of the collection, “If you want poems smooth-tongued or surrealistic, don’t look here.” Welch is right. Rather than self-indulgent esoterica gone soft around the edges, Reese offers sharpened words about tough people and hard lives and landscapes. In a style that’s rugged as washboard gravel, he introduces people like Harold Cummins, who never learned to drive because he never had anywhere worth going. He takes us to a Main Street bar where you can “in one corner listen as Harold Tahatchenbach, blinder than a coon in headlights, bends the truth,” and watch as Linus Cummins prances around with antlers on his head. And he travels the lonesome byways of Cedar County, Neb — “blasted country” populated with tough people who have been “pounding the dirt since they could first stand.” People like that are worth meeting. Trips like that are worth taking. – Kevin Woster, Rapid City Journal

An Assistant Professor of English and the Director of the Plains Writers’ Tour at Mount Marty College, Jim Reese demonstrates and documents his undeniable talents as a poet and wordsmith with These Trespasses. This is a poetry that doesn’t have a delicate bone in its whole literary body. Here are a series of highly recommended and distinctive poems that are vivid, blunt, candidly descriptive, and compelling in their engagement with the reader. “At The Bar With Bella”: “Give me a shot of Cuervo/with training wheels,” she said/”And fill this guy up.”//That’s all it took. She had me./I watched her hammer one back and then another./She sucked on the limes, tore them to their rind,/then ordered a bloody beer/and slid to the stool next to me.//”Wedding cake and funeral ham/are my two favorite kinds of food./I’m serious,” she said. “Think about it.”/So I thought about it./And she made all the sense in the world.” – Midwest Book Review 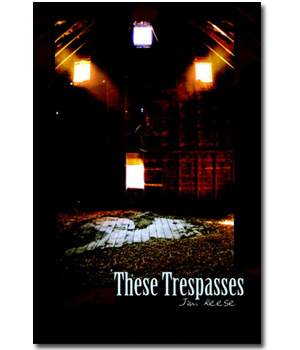