Ride shotgun down the back-roads of the Great Plains as Reese becomes Willy the Wildcat at a small Division II school, drives a tractor into an outbuilding his first week on the job, and discovers, sometimes with horror, the truth – after immersing himself in the lives of strangers, friends and prisoners. Travel to San Quentin prison in San Francisco Bay where he has full access and isn’t afraid to ask the tough questions. Join him in a superstore pharmacy prophylactic aisle. Explore teenage angst and desire with him at a Midwest skating rink. Accompany him as he archives his mother-in-law’s peculiarities, often verbatim.

Reese was born in Iowa, but moved to Omaha at age seven where he grew up in what passes for “the big city” in Nebraska. He married into a farm family, moved to northeast Nebraska, and this book captures the disparity between urban and rural America. He takes sympathetic, comic, and serious looks at the people he writes about, offering a humorous and equally critical view of himself. He captures those moments in the belly of the heartland, where all are welcome to the strangeness of good company and rural behaviors, and in doing so, these essays record the zeitgeist of the time. The intersections of Reese’s stories about the incarcerated or genuine mid-western sensibilities allow readers to take the reins and become part of his ongoing journey to find his place in the world. Reese is a wandering minstrel, and as the author of four widely-praised books of poetry, he knows how to blow our hearts sideways.

“Jim Reese’s new book is what we might think of as ‘an evening’s entertainment,’ and it’s an enriching entertainment at that, witty and funny, shadowed by feelings deeper and more meaningful, a kind of operetta in prose, and it will stick with me for a good long while. I recommend it.”
—Ted Kooser, winner of the Pulitzer Prize, 13th Poet Laureate of the United States

“Bone Chalk is the best kind of memoir, an expansive and bracing tour of a region and people both eminently familiar yet particular enough to feel like another universe. Fast, funny, dark, and surprisingly moving. Jim Reese is a brilliant tour guide of the Plains.”
—Stephen Markley, author of Ohio

“Jim Reese’s Bone Chalk is like a strong shot of rye, a piercing look from a stranger, or a stray bullet in the dark. There is a startling honesty that slams you against the wall by the throat and holds you there until you see the truth, a unique perspective into the world of true crime from a gifted writer.”
—Craig Johnson, author of the Walt Longmire novels, the basis for the Netflix drama Longmire

“How does one locate and unlock the Middle West? I like to look for the inscribed grid of township squares, that checkerboard from above, sometimes punctuated with the Zen enso of a center pivot irrigation rig. Jim Reese, in this excellent and exacting collection, replicates that layout in many of these essays—topographies of stark juxtapositions, intricate quilted collages, high contrast and high definition chainmails of the Middle Border. Hopscotched and hobnailed, the pieces of Bone Chalk map out, again and again, the famous paradox of place where one is in the heart of the heart of the country at the same time one finds oneself in the middle of nowhere.”
—Michael Martone, author of The Moon Over Wapakoneta and Brooding

“Jim Reese is an American original! His voice rises out of the Great Plains to bear witness to the foibles, folkways and oddities of living in the small towns and villages that are sometimes only a collection of a few dots of light to planes flying overhead in the dark. Reese has an easy voice to listen to—playful with a hint of deeper truths about the complex soul of the Midwest: dark and hopeful as we work hard to make lives in places beset by hard winters, hot summers, and constant economic uncertainty. Yet living here is full of humor and joy in the everydayness Reese chronicles with surprise and tenderness.”
—Jonis Agee, author of The Bones of Paradise 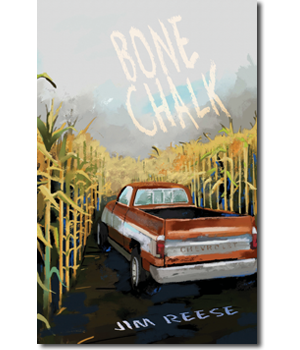